The MVC pattern lies at the heart of the Cocoa framework and iOS development. It is clearly visible the first time you build/read an iOS application. There is a controller (UIViewController), view (storyboard, nib files) and finally model which you define.

There are times when you look at your controller class and think it would be nice to have another controller taking care of that part of the view. This will allow you share responsibility for managing the interactions in multiple classes and make sure that each of the controllers have a specific task at hand. Furthermore, splitting responsibilities across classes will ease future maintenance and development.

If you look further you probably have multiple controllers displayed on the screen already. There are obvious examples - UITabbarController and UINavigationController are displayed together with custom controller you built. We will build a simple application which just has one button on the main view. This button will be managed by the child view controller. We need a simple project with one view. I assume you are accustomed with Xcode and able to create simple single view application.

The simplest step of all. The example parent controller will ultimately be almost empty. The only responsibility interesting to us is creation of the child view controller.

Lastly, the child view is adjusted so that it displayed in the center of the screen.

As I mentioned before the child is responsible for managing its own view. The parent controller decides where to place the child view and what size it should be (by initializing it with a frame). You implement it as you would do with any other controller. There are some extra methods needed to support the parent-child relationship, they will be discussed below so don’t worry about them at the moment.

As you can see this view controller has an initWithFrame method with takes the frame to which the child should draw its views. It is stored for later use in loadView.

The view hierarchy is build in the loadView. This method is called the first time view property of the controller is accessed and it is nil. It means that the controller needs to build it. In our case we create the UIView using the frame that we stored in the init method and assign it to the self.view property. I also adjusted color of the view so that it is clear which part of the screen is managed by parent and which by the child. Further, the UIButton is created and assigned to the center of the view.

There are two methods that need to be discussed:

This is automatically called when the the child is added to the parents pool of children using addChildViewController. It should also be called as a first step when the parent wants to remove the child with a nil controller.

In the parent view controller I also added a method to remove the child. I will not discuss it in detail as I think it is quite straighforward. 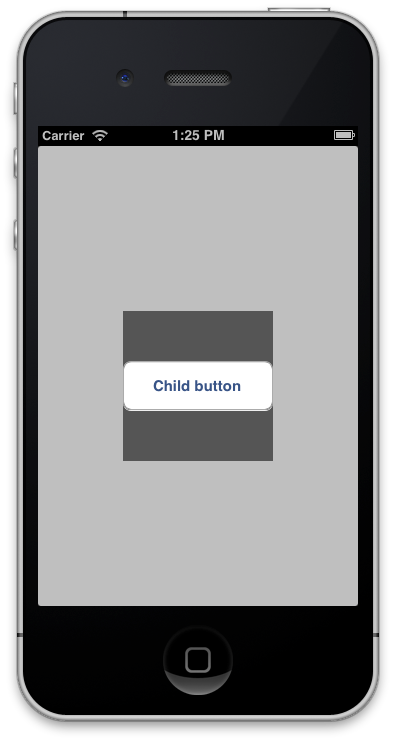